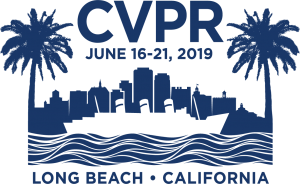 As tradition wants, in June 2019 we attended one of the major computer vision conferences. This year the conference happened to be CVPR. Here at DVC we know how fast paced our field is and firmly believe you need to go out and learn from the best if you want to keep that pace. This is why the conference week is such an important time of the year for us.

This year CVPR was the biggest CVPR ever with over 9000 attendees.

The Computer Vision and Pattern Recognition (CVPR) conference is a well known meeting held every year around the United States.

I can safely say it is the biggest showdown of new ideas and state-of-the-art solutions in the computer vision field – and it’s also a good time to meet new and old friends and strengthen relationships within the community. 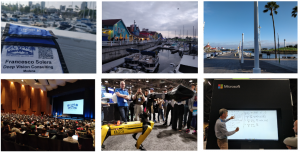 With a record 1294 papers accepted, the program for this year CVPR was very dense.

I will start by saying I could not count more than 5 (five) papers not using deep learning whatsoever in their solutions. Even if we consider the likely chances of missing a few, the number of DL-free papers is still below 1%.

Given the rarity of such papers, I want to point out one that I really liked, “On Finding Gray Pixels” from Jiri Matas’ lab.

Gray pixels have one very neat property: in a color-biased image, they capture the illumination color; and in a color-balanced image, their RGB values are all equal. If one can find the gray pixels of an image, it can leverage their biased color to restore color constancy on the whole image. By the way, our brain has a super effective color constancy algorithm, which is basically why the world always looks better from our eyes than from a picture (until now).

It’s also worth mentioning a couple of the award winning papers, as they hit some of the most interesting applications presented at the conference.

The best paper award was given to “A Theory of Fermat Paths for Non-Line-of-Sight Shape Reconstruction” from CMU.

As the word suggests, Non-Line-of-Sight Shape Reconstruction deals with the task of estimating an object shape which is not directly observable from the sensor. It’s no magic: the key insight is that any object in the scene subject to a light source reflects photons, and some of these photons will eventually reach visible objects and be reflected again towards the camera. The trick resides in controlling the light source and decoding the arrival times of these reflected photons. 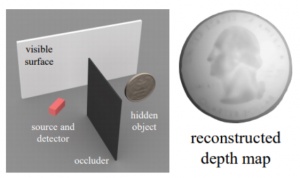 Another good piece of work rewarded with a best paper honorable mention is “A Style-Based Generator Architecture for Generative Adversarial Networks” from NVIDIA.

The most striking contribution of this work resides in the ability of the generator to sample randomness at various depth and semantic-level of the generation process.

While in classical GAN architectures, only a single vector is randomly sampled to generate a new image, the proposed GAN samples three of them. In the application scenario of face generation, a random noise vector is sampled for the coarse attributes like gender, pose or hair length; one for the medium attributes like smile or hair curliness; and eventually one is sampled for finer details such as skin color. And the best part is that this coarse-to-fine distinction of details emerged naturally during learning and no supervision was provided to force it. All of this allows for i) a more controllable and intuitive interpolation space and ii) the long-sought introduction of randomness in details e.g. in the way hair are arranged on a face.

A second honorable mention goes to “Learning the Depths of Moving People by Watching Frozen People” by Bill Freeman and Google Research. The system proposed in this paper is able to predict a dense depth map from RGB images containing people “in the wild”. This has long been considered a difficult task in depth-from-RGB prediction because of the lack of datasets. To obtain sparse depth maps from videos, structure-from-motion techniques are usually employed. Nevertheless, videos with people are typically discarded because the combined motion of camera and people in the scene makes a bad case for SFM. Hence the lack of datasets. In this paper, the authors introduce a new dataset comprising a collection of YouTube videos of mannequin challenges (see https://www.youtube.com/results?search_query=maneqquin+challenge). In a mannequin challenge video, people are stationary while the scene is moving, so all geometric constraints hold and depth can be extrapolated by SFM and used to supervise a deep net.

What can we say about the remaining 1290 papers presented at CVPR?

We came home from CVPR with many good ideas to put into practice. Get in touch if you want to know more about how we apply cutting edge computer vision and deep learning solutions to real world problems.

This website uses cookies to improve your experience while you navigate through the website. Out of these, the cookies that are categorized as necessary are stored on your browser as they are essential for the working of basic functionalities of the website. We also use third-party cookies that help us analyze and understand how you use this website. These cookies will be stored in your browser only with your consent. You also have the option to opt-out of these cookies. But opting out of some of these cookies may affect your browsing experience.
Necessary Sempre abilitato
Necessary cookies are absolutely essential for the website to function properly. This category only includes cookies that ensures basic functionalities and security features of the website. These cookies do not store any personal information.
Non-necessary
Any cookies that may not be particularly necessary for the website to function and is used specifically to collect user personal data via analytics, ads, other embedded contents are termed as non-necessary cookies. It is mandatory to procure user consent prior to running these cookies on your website.
ACCETTA E SALVA
Simone Santillo

Simone Santillo, born in Scandiano (Reggio Emilia, Italy), 1996, (MS in Computer Engineering, ’21), got passionate for computer vision and artificial intelligence since the years of graduated studies; in summer 2020 he applied and got selected for an internship in Deep Vision Consulting, where he wrote a thesis on a review on object detector, with a particular emphasis on the relevant features for industrial exploitation. He joined the Deep Vision Consulting group in early 2021.

On top of computer vision, the passion for coding brings Simone to regularly join the Advent of Code and other algorithmic challenges for Python and C++.

Emanuele Ghelfi, born in Fidenza (Parma, Italy), 1994 (MS in Computer Science and Engineering, major in Artificial Intelligence, ‘18). Emanuele’s thesis work was translated to the paper “Reinforcement Learning in Configurable Environments”, eventually accepted at ICML (International Conference on Machine Learning) 2019. Emanuele is also co-author of the book “The Reinforcement Learning Workshop”, available on Amazon, that presents the main concepts of Reinforcement Learning, both from the theoretical and the practical point of view, through Python coding. Strongly passionate about computational geometry, deep learning, reinforcement learning and GANs, Emanuele continued pursuing his continuous scientific updating even after graduation: in 2019 he gave two talks on GANs (“Deep Diving into GANs: From Theory To Production”) at EuroSciPy, Bilbao, Spain and PyConX 2019, Florence, Italy. See his github for the complete list of personal projects. Emanuele joined Deep Vision Consulting in 2020.

Riccardo Buscaroli, Imola, Italy, 1994 (MS in Computer Engineering ‘19), since his early years spent at university, he got extremely passionate about computer vision. During his Master thesis he developed a software to read and interpret diagrams related to logic and mathematical games.

He has an extremely quick learning curve on any programming language. His passion for technology extends also to computer graphics, 3D modeling and, why not, put them together for coding new PC games.
He joined the Deep Vision Consulting team just after graduating, in early 2019.

He is main inventor of 2 patents (U.S.P.T.O.) and author of more than 20 papers in international journals and conference proceedings (see updated list).

In 2002-2004 Giovanni served as research associate in the Computer Vision and Robotics Research (CVRR) Lab directed by Prof. Mohan Trivedi at UCSD (University of California, San Diego) and in the Multimedia and Mobile Streaming Labs (MMSL) in Hewlett Packard Labs (Palo Alto, California), addressing vision-based multiple object tracking in sensor networks.
In 2006-2010, during his PhD, Giovanni’s main focus was on video surveillance in mobile scenarios, with a particular attention to object detection.

The fastly growing pace of Deep Vision Consulting is taking most of Giovanni’s time over project management and customers relationships, however he purposely keep active in technical development. In the past few years he served on many projects, tackling: slam by stereo cameras, people tracking from thermal cameras, people and posture analysis from depth cameras, face and facial features analysis, video encoding and streaming, plate detection, 3D object analysis by use of profilometers, multiple object tracking by monocular cameras, geometry and pose recovery for augmented reality, medical imaging and sport analysis, optical character recognition for the gaming industry, robotic kinodynamic path optimization and many others.
Additionally he served as technical consultant for the preparation of applications for Horizon 2020 SME Phase 2, which eventually all obtained excellent scores and part of them got funded (see press release).

In 2011-2013, during his PhD, Michele’s main focus was on highly optimized image processing in embedded and mobile scenarios; in 2014 he developed an algorithm to detect ellipse in monocular images, which was considered as state of the art in literature.

In 2015 he joined StackOverflow with the nickname Miki to stay up to date with OpenCV and C++ developments. Now he’s 4th in the “OpenCV” tag all-time ranking, with more than 500 accepted answers.

Michele plays a key role in Deep Learning and Computer Vision Consulting, because of his solid experience in image processing, unquestionable programming skills, and extreme practical sense for problem solving.

In the course of the Phd, his research interests focused on applying machine learning to problems like people tracking, group detection and crowd analysis at large (see the github).

In 2015 he was research assistant at Duke University (North Carolina, USA), working  on multi-camera multi-target tracking under the supervision of prof. Carlo Tomasi.

Eugenio Nurrito, Modena, Italy, 1990 (MS in Applied Physics ’16), during the course of his studies he mastered the themes of parallel computing (at Cineca), artificial vision and deep learning, techniques used extensively in his thesis work in medical imaging. He joined the Deep Vision Consulting group in 2018.

Always promoter of the open source cultural approach, he has broad knowledge of the Linux world.
He is passionate and expert of Python, that he exploits to tackle themes of software designing, prototyping and development of advanced engineered solutions for deep learning, big data analysis and cloud services.

Motivated by an inborn curiosity for the use of IT applied to the world of science, in the free time he enjoys designing solutions by means of micro-controllers and single board embedded PCs like Arduino and Raspberry, or by Android apps development, like “Fiumi Emilia-Romagna” (over 6000 downloads), which allows a real time check of water levels of rivers over the Italian territory.

– Analysis of 3d objects (for industrial automation or surveillance)

Augmented and Virtual Reality, use of gaming engines (e.g. Unity)